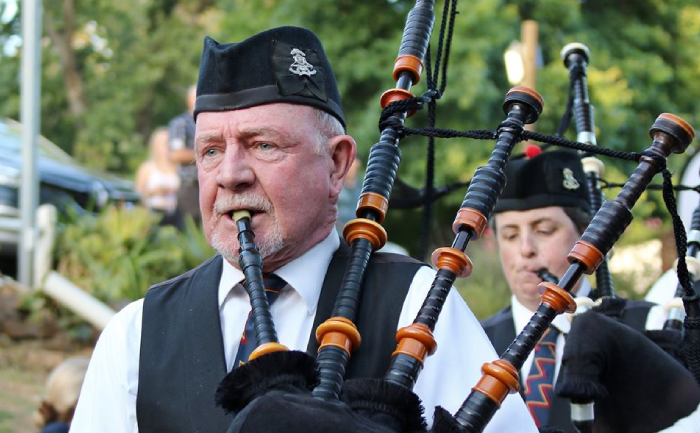 Iain Grant immigrated to South Africa from the UK where he worked as a commercial diver. Whilst based in Bristol Iain played for the City of Bristol Pipe Band as a Piper. So, when walking around the Cavendish Square Shopping Centre in Claremont and hearing the bagpipes being played, Iain was immediately drawn to the sound. After the performing pipe band had dismissed, Iain then approached the Pipe Major Ken Langlands and the obvious conversation was entered into. Pipe Major Langlands then invited Iain to join the Cape Field Artillery Pipe Band based at Wingfield. And that relationship with the Nelson Mandela Artillery Regiment (NMAR)/Cape Field Artillery (CFA) lasted for 44 years.

Iain spent many memorable years with the band until work took him up to Johannesburg, and although he temporarily left CFA, he continued to play the pipes, but this time for SAS Rand (a Reserve Force Navy unit that also had a pipe band). Yet throughout all the time away, contact was still kept between Iain and the CFA pipe band as every time the CFA pipers went up to Johannesburg to attend a pipe band competition – Iain and his comrades from CFA would meet up. On more than one occasion the CFA band members landed up being supplied with accommodation by SAS Rand at their base in Wemmer Pan.

After a couple of years, Iain decided to leave Johannesburg and head back to Cape Town for personal reasons. Enroute he pulled into a garage to refuel his car and low and behold a voice from the other side of the petrol station called out – it was one of the pipers from the CFA pipe band. The band was on its way to Durban for a competition – so as soon as they returned to Cape Town Iain rejoined their ranks.

On Saturday the 8th August 2020, the band arranged a farewell for Iain to say thank you so much for his 44-year service with the band. Iain served as a Sgt in the Regiment and very proudly performed for all these years with the band. He was thanked for his service by Pipe-Major Grant Scheffel, the band’s current Pipe Major thereafter WO2 Andrew Imrie, bandmaster and former Pipe Major presented a gift on behalf of the band, the Band Officer Major Dalene Coetzee finished off with a few short words about Iain’s always happy demeanor and professionalism at band functions and parades. Thereafter, during tea and snacks, all the band members joined in wishing Iain well on his return to the UK as well as sharing a few anecdotes of parades, etc in the past that Iain had taken part in.

We know that it is not a final goodbye, merely until we meet again……….