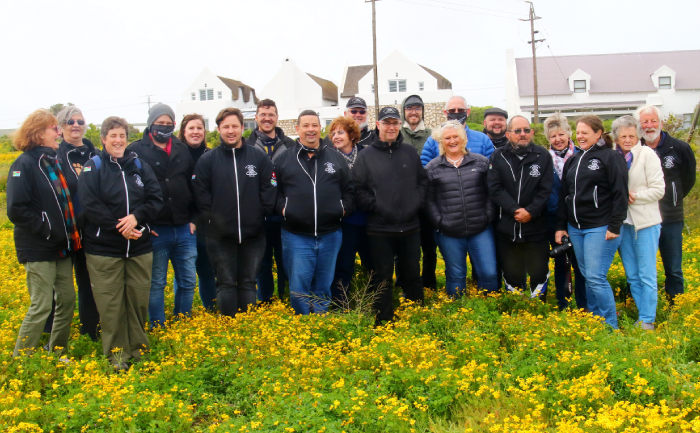 Every Saturday with out fail the band has met at our rooms at the Castle of Good Hope to practice our new tunes and socialise and chat about what has been happening during the week. We thought a little road trip to see the flowers around the Cape would be a fun thing to do as a band not realising that the weather wasn’t going to play its part. So, the day was set, the family were invited, and we met at the Farm Stall in Melkbosstrand on the West Coast.

We told the band to meet at the Farm Stall in Melkbosstrand at 8am not realising that there were 2, 4 kilometres away from each other, but we met up for coffee and planned our route. Lex, one of the legends of the band, suggested to go see bonsais at the nearest Bonsai Society. Members of the society meet on a weekly basis. We met up with Dawn who showed us the many bonsai trees on her property. It really shows the patience and skill which the band can relate. Playing the bagpipes can be quite difficult at times. The road trip began with Major Dalene Coetzee at the head of the convoy through the Cape. We saw many fields of yellow flowers as we drove in the direction of Darling through Atlantis. The weather was not playing its part and flowers were snug like a bug under a rug.

We left for Darling, a small town in a farming area on the west coast region of the Western Cape, where we got to see Evita se Perron run by South Africa’s most recognisable drag queen, Evita Bezuidenhout. Pieter-Dirk Uys, the man behind the lady, converted the old, disused railway station at Darling, where he lives, into a cabaret venue called Evita se Perron (Perron is Afrikaans for station platform) and performs there regularly. There is a museum of Evita’s life’s work for the world to see as well as a coffeeshop in the theatre where Evita performs. Their French toast with bacon is to die for and enjoyed by many you should go visit. We ventured to Jacobsbaai to see the scenery. We sure knew how to take over a place wherever we went. We saw some of the houses that the folks use as their holiday homes.

See the Kitchen at the Sea

Roaming the cape can really make you hungry and finding a restaurant to serve 25 people at a drop of a hat was a struggle at first but Jacques, one of our pipers knew a place and we booked a table. SeeKombius is a restaurant in Tietiesbaai, Paternoster right on the beach that has boats outside with tables in them. This would be iconic if it was summer to sit outside and see the sun set but, on this day, it was 15 degrees with a chance of rain. The off-season restaurant was not ready for us as we took over half of the restaurant. But they were certainly accommodating, and we had plenty of time on our hands as we chatted and drank the day away. A lot of fun was had and no doubt we will be doing it again.